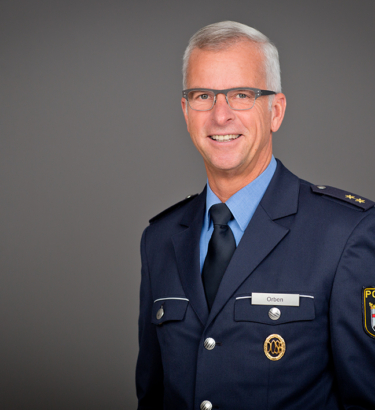 President of the German Roadpol

Volker Orben is experienced in state and federal traffic and constitutes his main area of expertise. His career led him to the situation room at the Headquarters in Mainz, as deputy head of a motorway police and on to the Ministry of the Interior Rhineland-Palatinate. He took over the traffic policing portfolio at the Ministry when he worked for the Head of the Rhineland-Palatinate Police Service. For many years he was part of the Committee for Internal Leadership and has played a significant role in implementing the cycle of leadership. Orben is representative of the Rhineland-Palatinate Interior Ministry’s Road Traffic Group in the committee representing both the states and the federation. In 2016, Orben was named the German representative in the European Non-Governmental Organization (NGO) ROADPOL and was elected into the board by the member states. The essential or main aim of ROADPOL as the network of the European traffic police forces is to increase traffic safety at a European level as well as to fight crime committed by transient offenders travelling throughout Europe and to intensify cross-border cooperation. In 2019 he was seconded to European Commission DG MOVE where he was working among other things on Cross Border Enforcement Directive. Since September 2020 Orben is ROADPOL President. As a main topic during his presidency, he is highlighting the necessity of harmonising traffic rules in Europe.